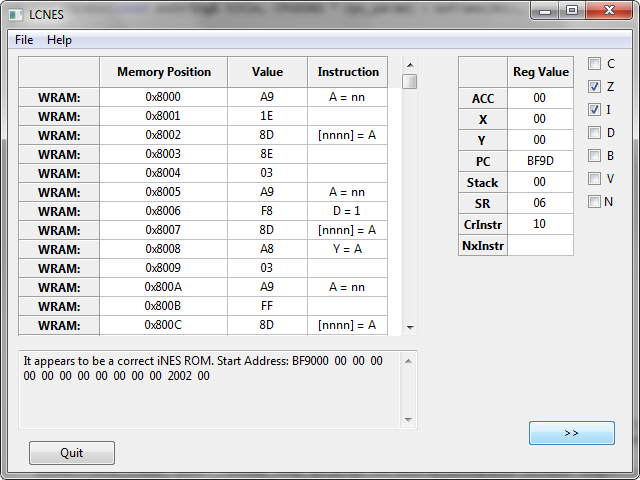 LCNES is a very simple debugger for the 6502 8-bit microprocessor, released in 1975. It was used in Nintendo´s first home console, the NES. The debugger was in fact programmed with the NES specs in mind.

I started this project in late 2008, starting third year of my engineering degree. Because we had only been introduced to the Java programming language, I thought I was missing out on the power of compiled languages, and chose C/C++ because lots of learning materials were available. I also wanted to find out an easy way to make portable GUIs, and loved emulators. The project lasted for a year, and I ended up learning about the marvelous wxWidgets libraries, and the dark world of emulator programming.

· Technical documents for many consoles

The source code and VS2010 project can be found here. To compile properly you need to install the wxWidgets libraries. There is a link above that explains how. Bear in mind it was a learning exercise! The source code is sloppy and full of silly mistakes.

The executable file can be found here. Unfortunately I cannot provide a ROM for testing.