Rise of the Tomb Raider (2015) is the sequel to the excellent Tomb Raider (2013) reboot. I personally find both refreshing as they move away from the stagnating original series and retell the Croft story. The game is story focused and, like its prequel, offers enjoyable crafting, hunting and climbing/exploring mechanics.

Tomb Raider used the Crystal Engine, developed by Crystal Dynamics also used in Deus Ex: Human Revolution. For the sequel a new engine called Foundation was used, previously developed for Lara Croft and the Temple of Osiris (2014). Its rendering can be broadly classified as a tiled light-prepass engine, and we’ll see what that means as we dive in. The engine offers the choice between a DX11 and DX12 renderer; I chose the latter for reasons we’ll see later. I used Renderdoc 1.2 to capture the frame, on a Geforce 980 Ti, and turned on all the bells and whistles. 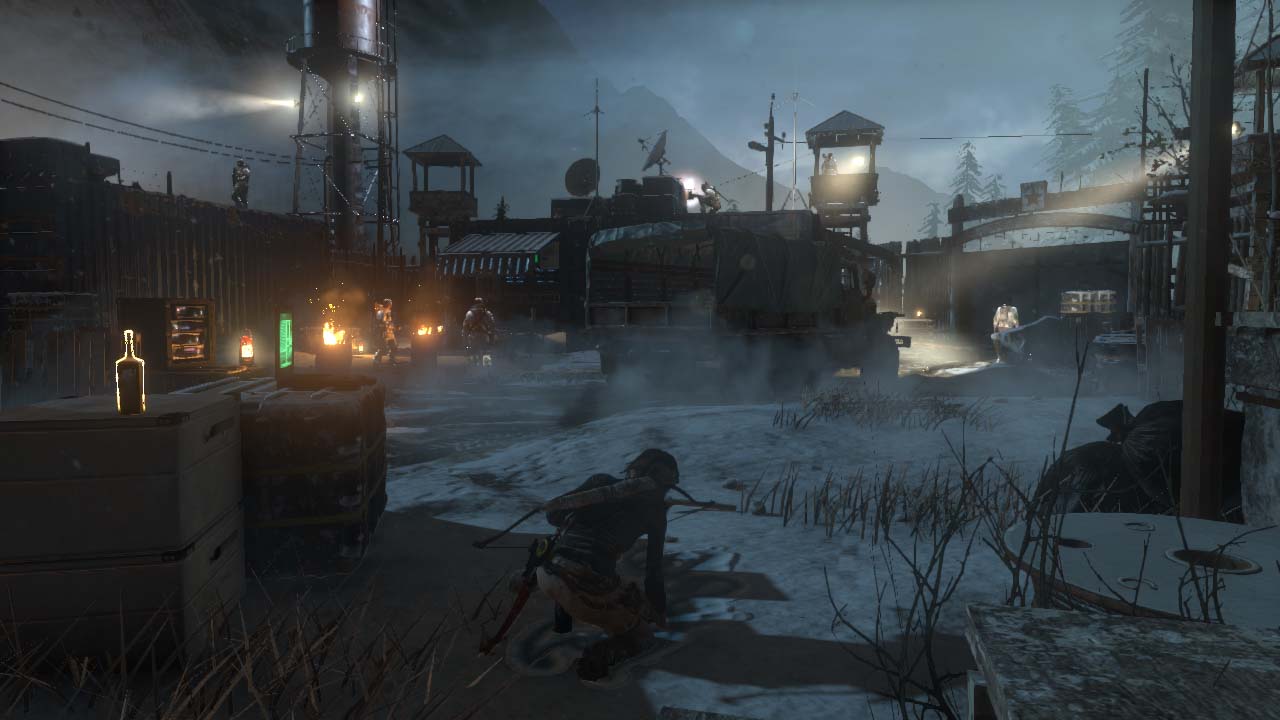 I can safely say without spoilers that in this frame bad guys chase Lara because she’s looking for an artifact they’re looking for too, a conflict of interest that absolutely must be resolved using weapons. Lara is inside the enemy base at nighttime. I chose a frame with atmospheric and contrasty lighting where the engine can show off.

A customary optimization in many games, a small depth prepass takes place here (~100 draw calls). The game renders the biggest objects (rather the ones that take up the most screen space), to take advantage of the Early-Z capability of GPUs. A concise article by Intel explains further. In short, the GPU can avoid running a pixel shader if it can determine it’s occluded behind a previous pixel. It’s a relatively cheap pass that will pre-populate the Z-buffer with depth.

An interesting thing I found is a level of detail (LOD) technique called ‘fizzle’ or ‘checkerboard’. It’s a common way to fade objects in and out at a distance, either to later replace it with a lower quality mesh or to completely make it disappear. Take a look at this truck. It seems to be rendering twice, but in reality it’s rendering a high LOD and a low LOD at the same position, each rendering to the pixels the other is not rendering to. The first LOD is 182226 vertices, whereas the second LOD is 47250. They’re visually indistinguishable at a distance, and yet one is 3 times cheaper. In this frame, LOD 0 has almost disappeared while LOD 1 is almost fully rendered. Once LOD 0 completely disappears, only LOD 1 will render. 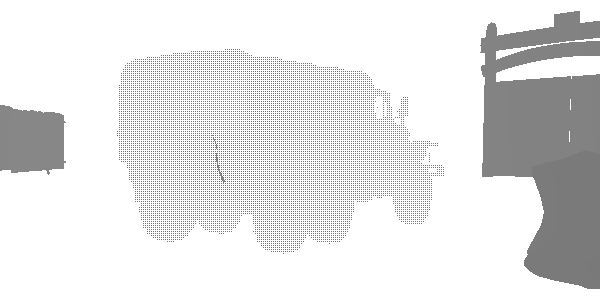 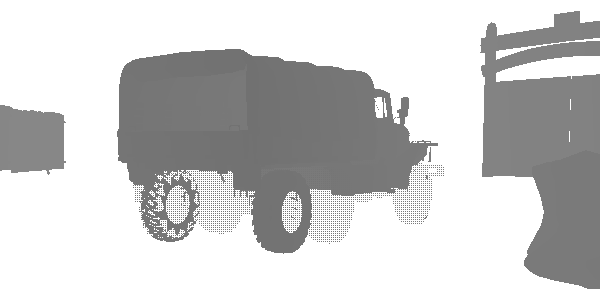 A pseudorandom texture and a probability factor allow us to discard pixels that don’t pass a threshold. You can see this texture used in ROTR. You might be asking yourself why not use alpha blending. There are many disadvantages to alpha blending over fizzle fading.

One disadvantage of this technique is that it can look worse than alpha fading, but a good noise pattern, post-fizzle blurring or temporal AA can hide it to a large extent. ROTR doesn’t do anything fancy in this respect.

Crystal Dynamics uses a relatively unusual lighting scheme for its games that we’ll describe in the lighting pass. For now suffice it to say that there is no G-Buffer pass, at least not in the sense that other games have us accustomed to. Instead, the objects in this pass only output depth and normals information. Normals are written to an RGBA16_SNORM render target in world space. As a curiosity, this engine uses Z-up as opposed to Y-up which is what I see more often in other engines/modelling packages. The alpha channel contains glossiness, which will be decompressed later as exp2(glossiness * 12 + 1.0). The glossiness value can actually be negative, as the sign is used as a flag to indicate whether a surface is metallic or not. You can almost spot it yourself, as the darker colors in the alpha channel are all metallic objects.